Sparks fly when a protective alpha meets an omega in danger, but there’s a catch: this omega is still human, and doesn’t know what he could become with a bite from the right wolf.

Being an alpha werewolf made Rusty Jamison one of the best while he served in the Marines, a team leader in the elite Force Recon. But now his instincts have made military life unbearable–he couldn’t protect his team without revealing what he was. He’s out of the Corps and taking his first job as a bodyguard, using those instincts while protecting his secret. His client is the last thing Rusty expected: a latent omega, a human with werewolf blood just waiting for a bite to awaken his potential.

Sam Hurley has fended off plenty of unwanted advances in his twenty-four years. As a baby-faced computer genius, he’s used to being sought after for more than just his brains–but now someone is stalking him, and Sam is going to need help getting him to take no for an answer. His new bodyguard seems like he’ll be able to do the job, but once Sam meets him he wants Rusty for a lot more than protection…

The Omega’s Pack (The Protection of the Pack, Book 2)

Rusty and Sam are now alpha and omega werewolf mates, forming a pack along with Mike. Every night brings the new pack closer to the full moon and Sam’s first omega heat, but there’s still someone missing…

Nick Bellici is scarred in body and mind from his time in the Marines, and now he’s struggling alone with life after war. He’s driven away everyone who cares about him—except his best friend Rusty, who won’t stop asking him to come to California and meet his new boyfriend.

Rusty Jamison is still learning what it means to have a mate and a pack to take care of as their alpha. Teaching Sam and Mike to handle their new werewolf abilities and navigating the politics of the local werewolf packs keeps Rusty busy, but he can’t let go of his hopes to bring his best friend Nick into the pack. That’s going to mean finally telling Nick the secret he’s been keeping for years.

As the pack’s omega, it’s up to Sam Hurley to bring them all together. Not so tough when there are only two other werewolves, but when it comes to adding in someone Sam’s never met, who’s been through things Sam can barely imagine, Sam’s newfound abilities will be put to the test. And all the time, Sam’s first full moon heat is looming closer…

The Omega’s Pack is a m/m (and m/m/m and m/m/m/m) werewolf romance featuring alpha and omega mates leading their pack to a happy ending with plenty of steamy action for everyone! 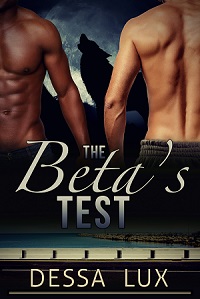 A werewolf who’s spent his life without a pack meets a werewolf whose pack is the only reason he’s alive. When these opposites attract, they both find out what they’ve been missing all along.

Brody Marshall’s parents never thought they needed any more pack than each other–but when they died and left Brody orphaned, he had no pack at all. Raised by a human foster mother, Brody has grown up into a geek who hides his wolf nature and is about to score his dream job. At his interview he meets genius programmer (and omega werewolf) Sam Hurley, and soon finds out that although Sam has a mate and a pack at home, he has more to offer Brody than just a job.

Nick Bellici has been a werewolf for a little over a month, since his best friend (and alpha werewolf) Rusty rescued him from his downward spiral by bringing him to California to join Rusty’s pack. Unfortunately, wolf shifting abilities and sharing a bed with three hot werewolves haven’t magically cured all of Nick’s problems. He’s still struggling to find his place in the pack when Rusty’s mate, Sam, brings home Brody–a beta werewolf, just like Nick.

When Nick meets Brody, the attraction is instantaneous, but Nick has more scars than the ones that show on his skin, and when it comes to loving Brody, he’s got to get it right without (much) help from his pack. Brody wants Nick, but when it comes to life with a pack who share everything and building something with Nick that’s just between the two of them, he knows he’s out of his depth. When these two betas join forces, will they sink or swim?

The Beta’s Test is a steamy m/m (and m/m/m/m/m) werewolf romance featuring a sexy geek and a scarred veteran finding love and lots of happy endings with each other and with their pack!

Sam may be a genius, but he still has a lot to learn about being the perfect omega for his alpha and their pack…

Sam Hurley learned a long time ago to handle his problems on his own: he spent most of his childhood in foster care, and when he was finally adopted, it wasn’t long before his new parents recognized his genius and sent him off to college at the age of thirteen. He found success as a behind-the-scenes computer genius working for a huge company, but he never found love or belonging until he met his alpha werewolf mate, Rusty. Three months in, Sam is up to his old tricks, trying to deal with his worries on his own and shutting out his pack–including his alpha.

Rusty Jamison hasn’t been alpha of his own pack for long, and his pack hasn’t been the easiest to lead. Still, he thought everything was going well, right up until his omega, Sam, stopped coming home from work. He’s not about to let Sam stay away for a third night in a row, or to let Sam think he can get away with this kind of human-style relationship drama. It seems he still has some things to teach his very clever omega about how wolves solve their conflicts, but will Sam understand what Rusty is trying to tell him?

(“The Omega Learns a Lesson” is included in the paperback edition of The Beta’s Test.)

An omega forced to mate an alpha he hates turns to his beta best friend for help to escape–but the only way out is to be stolen by another alpha.

Grant Denny is an omega who never wanted an alpha mate. He doesn’t want to be a sex toy for an entire pack, even if the alternative is to go through the agony of full moon heats locked up alone. But the choice has been taken away from him–he’s been given to Cliff, an alpha he can’t stand, who is keeping him in a remote cabin along with Jack, a beta who is his best friend, packmate, and the only person he’s ever wanted.

Jack Merritt is trapped in his wolf shape by the cruel alpha who claimed Grant against his will, and took Jack along with him. Jack has loved Grant forever, and he’ll do anything to stay with the omega–but Grant begs him to run away at the first chance, to try to find some way they can both escape before Grant’s heat arrives and forces him to submit to the alpha. Jack would do anything for Grant, but leaving him behind is the hardest thing he’s ever done.

Mike Gilford has been an alpha werewolf for half a year now, and he’s ready to find a mate and start a pack of his own. He never imagined that he would find them like this–a lost wolf, hurt and helpless by the side of the road, and the trapped omega he leads Mike to rescue. Mike only wants to help, but the moment he meets Grant the pull between them is undeniable–and terrifying to Grant, who is trying to escape from being bent to an alpha’s will.

Grant and Jack need a pack’s protection, and Mike is willing to give it, but can he keep them safe without keeping them prisoner? Can Grant learn to trust that Mike isn’t like the alphas he’s met before, and that his destiny as an omega isn’t the doom he’s always feared? With the full moon and Grant’s next heat on the way, there’s not much time for three wolves to make themselves a pack and find their way home…

Sam and Grant are omegas who’ve never shared a pack with another omega–until now. Neither of them is sure what they mean to each other, but for the sake of their pack they’re going to make it work. Spending a day alone together is a surefire way to get to know each other better, whether it ends in blood, sweat, or something else…

This is a novelette (12,000 words) set in the world of THE PROTECTION OF THE PACK. It does not stand alone, and is meant to be read after THE ALPHA’S HOME. It’s a little bit of sweet and sexy fun for anyone who’s been wondering what the Jamison pack is up to!